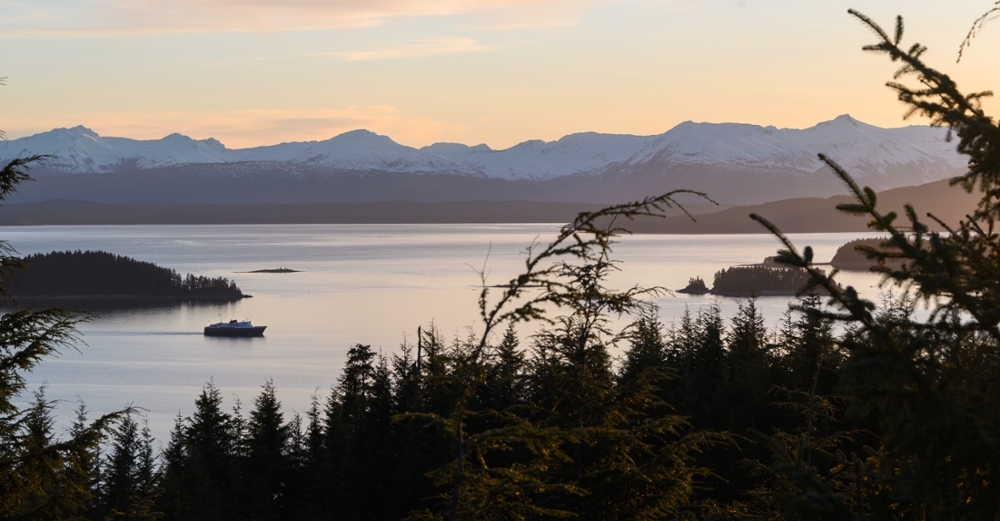 A ferry crosses into Auke Bay in Juneau at sunset.

ACRC is part of a collaborative effort with the Alaska Marine Highway System to monitor ocean acidification in southeast Alaska and British Columbia.

As the amount of carbon dioxide in the atmosphere increases, about a quarter of it is absorbed by the ocean resulting in increasingly acidic waters. Estimates suggest that roughly 7 million tons of carbon dioxide now enter the ocean each day. In the Gulf of Alaska, cold temperatures, influx of freshwater from streams and glaciers, and naturally high concentrations of carbon dioxide mean that marine waters are predisposed to acidification. As a result, Alaska is expected to experience the effects of ocean acidification sooner and more severely than lower latitudes. Alaskan communities and ecosystems rely heavily on the health of the ocean, and the impacts of ocean acidification may be significant for marine life, seafood industries, and the economies of local communities.

To understand the complex dynamics of ocean acidification along the northern Pacific coast, continuous measurements are needed at a large scale. ACRC, the Hakai Institute, the Alaska Ocean Observing System (AOOS), the Alaska Ocean Acidification Network, and the NOAA Pacific Marine Environmental Laboratory have formed a partnership with the Alaska Marine Highway System to establish an unprecedented ocean monitoring effort. Every week, the M/V Columbia ferries passengers over 1,800 miles from Bellingham, Washington, up the coast of British Columbia, through the inside passage to Skagway, Alaska and back. The vessel is now doing much more than getting travelers and cargo from port to port. Since 2017 it’s been collecting, analyzing, and reporting back on the surface seawater chemistry along its route, the longest ferry run in North America. Hakai Institute scientist Wiley Evans installed and maintains the equipment on board that’s responsible for these measurements.

Every three minutes, the monitoring equipment collects a new seawater sample to analyze for dissolved oxygen, temperature, carbon dioxide, and salt content. This year-round data collection marks an advance in the understanding of the rate and trends of acidification of coastal waters, at a scale never conducted before. Measurements of this frequency and extent can help determine acidification hotspots as well as refugia, and help fishery, mariculture, tourism, and wildlife managers mitigate and adapt to acidification patterns. ACRC postdoctoral researcher Mariela Brooks is using the ferry data set to study the influence of freshwater discharge from coastal watersheds and melting glaciers on the chemistry of the nearshore ocean and how that may change over time.