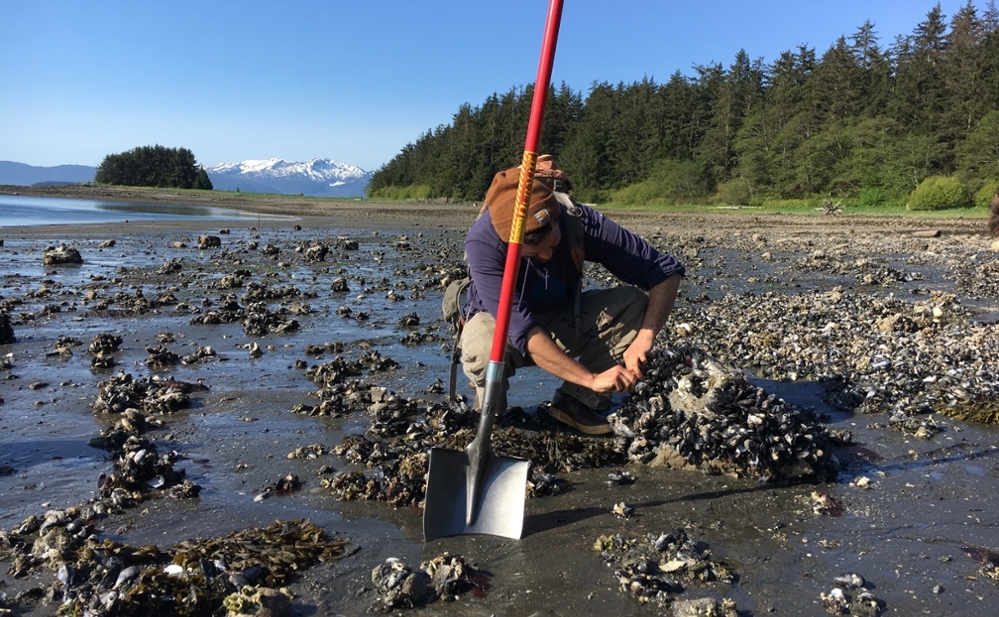 ACRC is working with tribal partners to understand the timing and drivers of the harmful algal blooms that result in paralytic shellfish toxin events.

Southeast Alaska communities have relied on shellfish for millennia, but this abundant food source can be deadly due to toxins caused by harmful algal blooms (HABs). HABs of the phytoplankton Alexandrium can occur at any time of year, although they occur more frequently in the summer months when the ocean temperatures are warmer. Alexandrium blooms often produce a suite of toxins called paralytic shellfish toxins (PST), which can accumulate in shellfish such as clams and mussels. At high concentrations, PSTs can cause illness or death in humans, birds, and marine mammals.

The processes that drive harmful algal blooms in Alaska are not well understood, and climate change and ocean acidification could increase the frequency and severity of blooms, meaning that the risk of Paralytic Shellfish Poisoning (PSP) related illness and death may grow.

The Southeast Alaska Tribal Toxins (SEATT) network introduced a monitoring program and established a state of the art analysis lab in Sitka, Alaska. Through the SEATT program, fifteen tribal organizations in Southeast Alaska communities monitor water quality and collect shellfish to be tested every two weeks at local harvesting sites. The lab can process samples for subsistence, recreational, and commercial harvesters within a 24-hour window once received. Still, not every community has the resources to test for PST, and because toxicity can change over a matter of days, the results become increasingly unreliable in the time passed since testing. The availability of timely, cost-effective testing facilities is imperative for safe shellfish consumption, but knowing which environmental conditions drive harmful algal blooms could help concentrate toxicity testing around high-risk time periods and areas.

To address this, ACRC postdoctoral researcher John Harley is collaborating with the SEATT network to compile a database of environmental data and shellfish toxin levels they have collected into a tool that may help map and predict PST events. By linking environmental data such as sea surface temperature, freshwater input, and solar radiation with data on shellfish toxin levels over a period of years, Dr. Harley is creating a model that weighs the influence of these combined factors to determine how likely an area is to have toxic shellfish. By training the model using data from previous blooms, it will eventually be able to use real-time environmental data to predict PSP risk in areas around Southeast Alaska.