The future of shellfish

Digging for the future of shellfish: UAS and Tribal researchers work together to understand changes to a valued subsistence resource 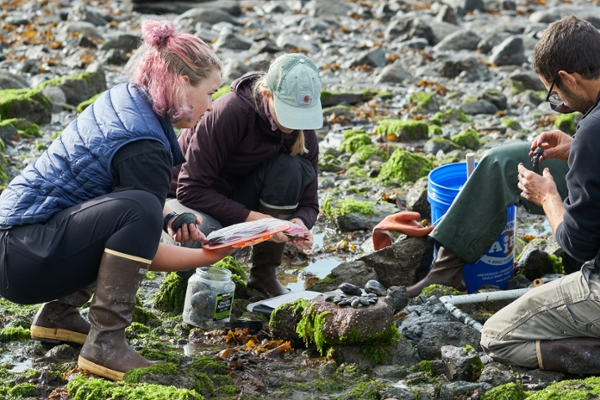 As the tide creeps up the shoreline at Juneau’s Amalga Harbor, ACRC researcher John Harley works shoulder to shoulder with collaborators from the Central Council of Tlingit and Haida Indian Tribes of Alaska (CCTHITA), digging shallow holes in search of clams. By the end of the day, the group will have uncovered nearly 500 clams. Most of the bounty will be weighed and reburied for a large-scale survey of the abundance of clams in the region, but the remaining clams will travel to the Sitka Tribe of Alaska Environmental Research Lab to be tested for toxins that can accumulate in shellfish.

In a project funded by the Alaska Climate Adaptation Science Center, Harley is modeling trends of harmful algal blooms in Southeast Alaska. Some algae blooms, such as the dinoflagellate Alexandrium, produce a suite of toxins known as paralytic shellfish toxins that accumulate in shellfish and make them toxic for human consumption. Harley works with the CCTHITA to monitor weekly toxin levels of clams and mussels at popular recreational and subsistence harvesting sites around Juneau as part of the Southeast Alaska Tribal Ocean Research (SEATOR) Network.

The Southeast Alaska Tribal Ocean Research Network reports on shellfish toxin levels around the Panhandle to improve food security for rural communities and ensure safe harvesting of an important subsistence resource. More than a dozen communities from Southeast and Southcentral Alaska regularly send samples of shellfish to Sitka where they are analyzed for paralytic shellfish toxins.

Since 2016, the SEATOR Network has collected and analyzed more than 3,000 shellfish samples, as well as data on environmental conditions and phytoplankton. “Without those data, we wouldn’t have a continuous monitoring dataset of harmful algal blooms or really any kind of long-term shellfish toxicity data in Southeast Alaska,” said Harley.

“The SEATOR Network was born out of this need to monitor these recreational subsistence resources, and it has been extremely successful in starting this collaboration, finding funding, and continuing to go out and collect these data. Without that long-term, continuously monitored record of shellfish toxins at vital points in southeast Alaska, my research wouldn't be possible,” said Harley.

By combining environmental variables like temperature, wind speed, and salinity with data from SEATOR, Harley created a model that can predict the timing of Harmful Algal Blooms in Southeast Alaska. To improve the accuracy of that model, Harley is working to understand how Traditional Ecological Knowledge about the timing of the herring spawn could play a role in identifying the historical timing of harmful algal blooms and the environmental factors that trigger them. 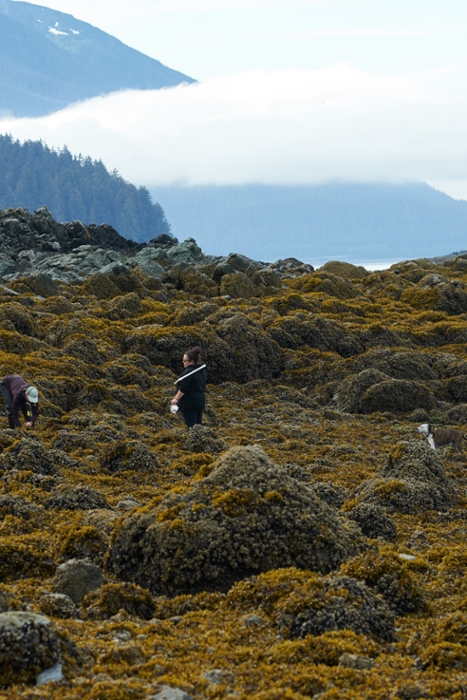 Traditional Ecological Knowledge from Tlingit elders in Southeast Alaska states that the herring spawn acts as an indicator for the end of the safe shellfish harvesting season in the winter and spring, before the returning warmth brings higher risk of paralytic shellfish poisoning. The potential link between the timing of herring spawning and the start of harmful algal blooms could hold the key to better predictions of future spikes in paralytic shellfish toxicity. If air or sea surface temperature drives the timing of spawning as it does harmful algal blooms, historical records of herring spawns going back to the 1980s could be used as a proxy for algal blooms.

Predicting when and where blooms will occur is becoming more important as increasing ocean temperatures lengthen the season where harmful algal blooms occur in Southeast Alaska.

“Here in Southeast Alaska, we're finding that with increasing sea surface temperatures, the window of potential bloom is expanding into months that are typically not associated with harmful algal blooms. It's possible that by 2050 we might see sea surface temperatures in winter months that could theoretically support Alexandrium blooms,” said Harley.