Black carbon and dust melt on the Juneau Icefield 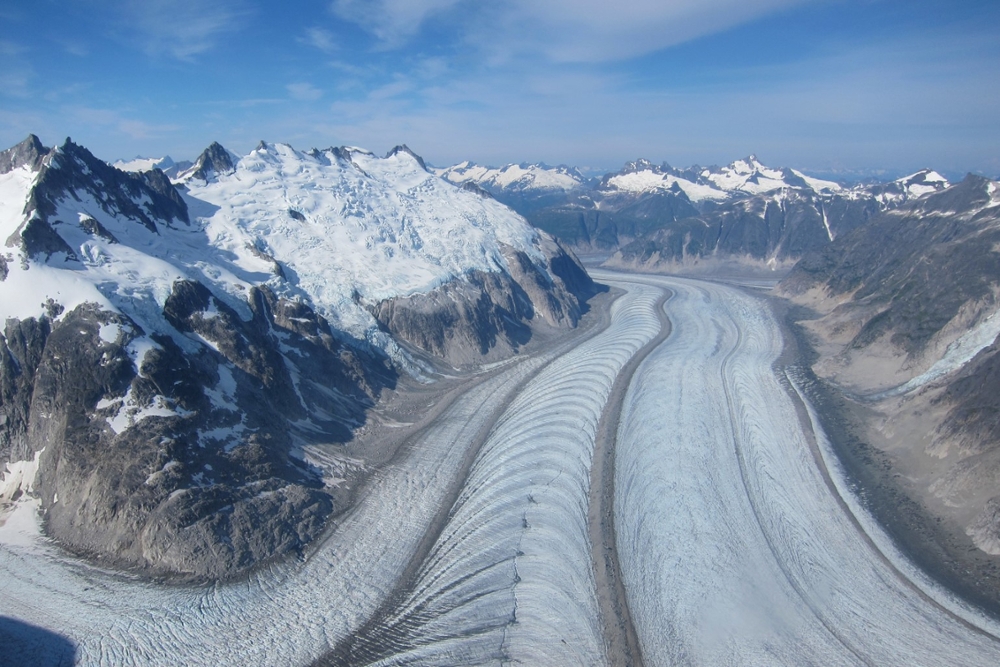 The Gilkey Glacier, an outlet of the Juneau Icefield, striped with dirt and rocks from the surrounding mountains. Photo: S. Nagorski

This is the first study of its kind on the Juneau Icefield, which is the fifth largest icefield in North America. By a recent estimate, roughly two-thirds of the volume and area of the Juneau Icefield will be lost by the end of the century. By 2200, it’s projected to be gone entirely. Nagorski and team’s recent findings could move that timeline up significantly.

Many first-time visitors to a glacier are surprised to find that the pristine white and blue river of ice they imagined is often marked up by dark material, consisting mostly of rock debris eroded by the glacier. Natural mineral dust kicked up from land recently exposed by retreating glaciers or blown in from distant arid environments, as well as black carbon (or soot) derived from ships, cars, aircraft, wood and oil burning stoves, wildfires, and industrial sources can also collect on the glacier’s surface.

Dark-colored dust particles absorb energy from the sun at a far greater rate than does fresh snow, which is the most naturally reflective surface on the planet. Add black carbon, which is the most efficient absorber of visible light, and the glacier begins to lose its reflective properties and soaks up solar radiation. “When the darkest, most absorptive type of material is deposited on top of the brightest, most reflective type of surface, it sets up a tremendous contrast,” says Nagorski.

As a result, the glacier snow begins to melt more rapidly as light-absorbing particles collect throughout the summer. The melt sets up a self-reinforcing cycle as the dust and carbon particles are concentrated on the snow surface and further speed up melting, which then causes the particles to become even more concentrated due to melt consolidation at the surface as the snowpack thins. As it warms and ages, the snow itself becomes less effective at reflecting light as the grain size of older snow is larger and its optical properties change. These factors compound one another, and as time goes on, the melt rate becomes more and more rapid. That is, until the next snowfall occurs.

“Every time a snowfall occurs, it resets the surface, like erasing a whiteboard. Fresh snow is like sunscreen for a glacier,” says Nagorski.

To figure out how much these light-absorbing particles are accelerating snowmelt on the icefield, Nagorski visited ten sites on the icefield and its outlet glaciers in May 2016, taking samples from freshly-fallen snow that had been minimally exposed to dust or black carbon. Nagorski and her team collected scrapings from the surface of the ice and dug snow pits across a spectrum of sites at increasing elevations and distances from Juneau. The snow samples were analyzed for dust at UAS and for black carbon at Central Washington University by co-author Susan Kaspari. Three UAS students helped with the work, including Alana Johnson (fieldwork), Abigail Nathlich (processing dust samples) and Mollie Dwyer (creating maps). 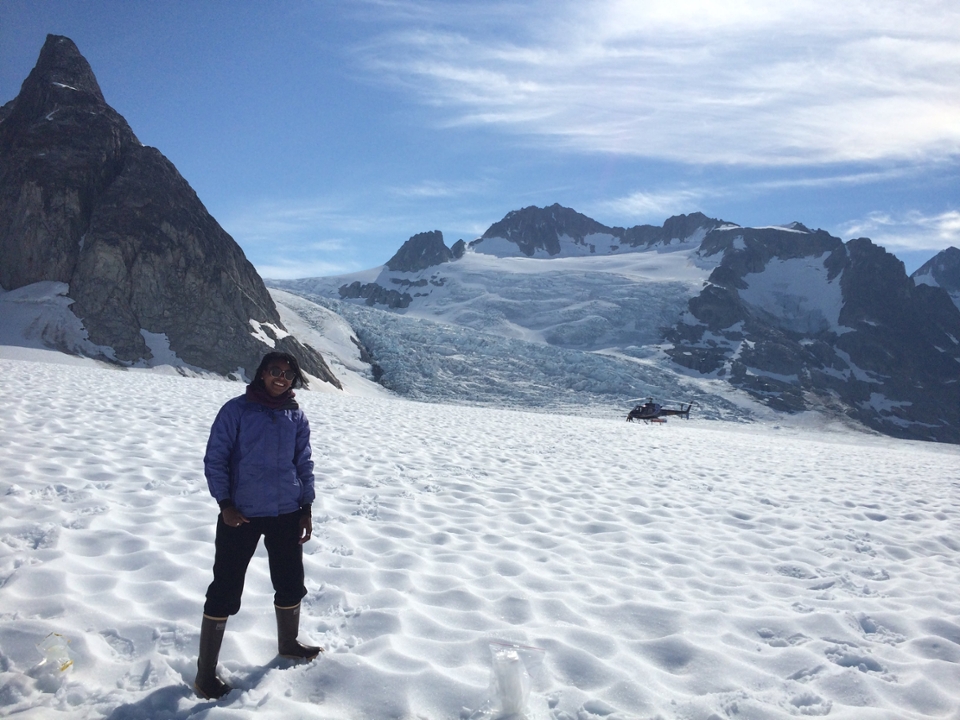 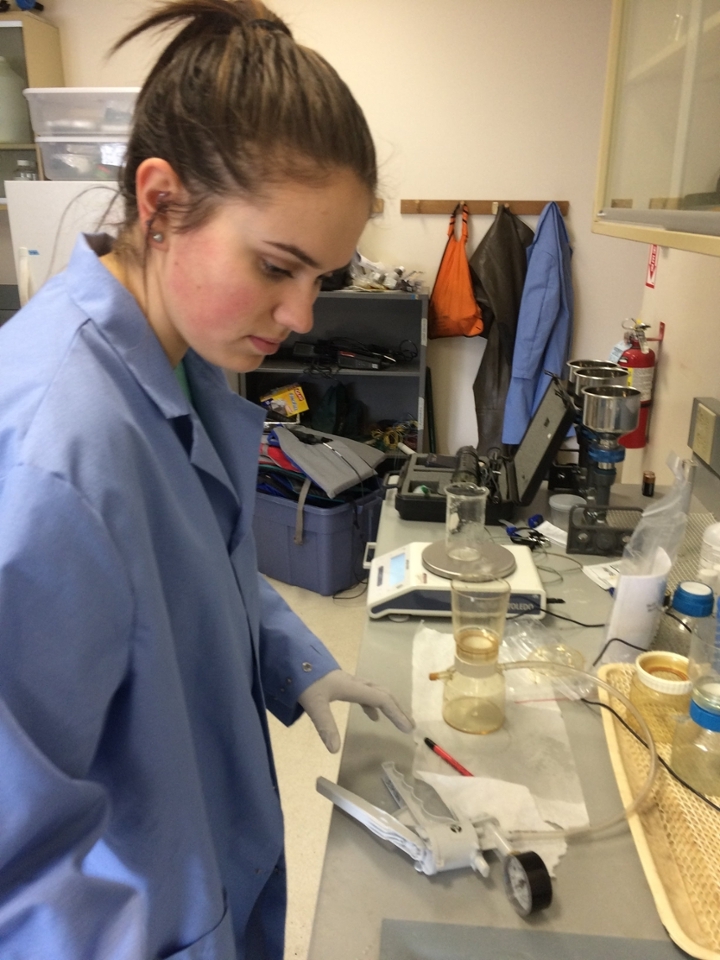 As expected, they found relatively little dust and black carbon at the sites in May, with fewer particles the farther the site was from the coast and Juneau.

Two months later, they returned to the field sites and found significantly higher levels of dust and black carbon on the glacier snow surfaces. At some sites, there were over 40 times more light-absorbing particles in July compared with May. Two sites had been melted all the way down to ice, with no trace of last year’s snow to sample. Calculations worked up by collaborator McKenzie Skiles at the University of Utah showed that the dust caused about twice as much energy absorption as the black carbon. Though black carbon is about 30 times more efficient than dust at scavenging solar energy, it was about 1000 times less abundant and therefore played a lesser role in driving snowmelt. In total, the research team estimated that the light absorbing particles were lowering the glacier surface by about 10-18 mm of meltwater during the sunny sampling day in July. A rough comparison with other data on glacier thinning rates in the region suggests that this could account for about half the surface snowmelt during such clear-sky days in late summer.

Snow and ice melt from light-absorbing particles are expected to increase in the future. As climate change lengthens the time between the last snowfall of spring and the first snowfall of autumn, the season for particles to concentrate on the glacier will increase. The sources of light-absorbing particles may grow as well. As glaciers retreat, they expose more fine-ground dust and silt to the air, and land use changes globally are increasing atmospheric dust concentrations. Black carbon from forest fires, a major source of black carbon at lower latitudes, may be imported to Southeast Alaska by wind transport.

Read the full article in the Journal of Geophysical Research: Atmospheres.