Climate Change in the NPCTR

In North America’s largest remaining temperate rainforest, coastal marine environments are intrinsically linked with the land through the delivery of nutrients that drive ocean productivity. Coastal margins are a unique study area for scientists working to understand the ecological processes of coastal environments, and what they might look like in our changing climate.

Research published in Bioscience this week took an interdisciplinary approach to evaluating land-sea interactions in the northeast Pacific coastal temperate rainforest (NPCTR). Allison Bidlack, University of Alaska Southeast Alaska Coastal Rainforest Center, led a team of researchers from university, federal, and provincial research agencies across Canada and the United States. The paper evaluates the land-to-ocean flow of carbon and nutrients in the NPCTR, their influence on nearshore marine ecosystems, and how these connections are altered by climate change.

The NPCTR spans over 1200 miles from the glacial valleys and marine fjords of southcentral Alaska to the redwood forests of northern California. It’s a hotspot for carbon storage and nutrient transport into coastal waters, but relatively few comprehensive studies have been conducted across the system as a whole. Studies that have been conducted in the region typically focus on distinct ecosystems rather than the tightly linked terrestrial to marine ecosystem.

“Although coastal temperate rainforests make up a relatively small portion of the land cover on the planet, they sequester more carbon per unit area than any other forested ecosystem. It’s important to understand the processes at play that sequester and move carbon out of these ecosystems because of their disproportionate impact on global carbon cycling,” said Bidlack.

Like most coastal margin ecosystems, the NPCTR is a dynamic region where the marine and terrestrial environments are closely connected by steep coastal terrain, heavy precipitation, and high volumes of freshwater entering the ocean from small watersheds.

The freshwater system of the NPCTR is complex, fed by receding glaciers and changing snowpack conditions. The potential shift towards warmer, wetter winters and drier summers due to climate change is expected to alter the timing and intensity of nutrient and carbonflow from the land to coastal waters.

Changes to the hydrologic system on land can have dramatic impacts offshore. For instance, abnormally high freshwater runoff in spring 2007 resulted in fresher coastal waters in British Columbia, intensifying the stratification of the water column and trapping nutrients from rising to surface waters where microorganisms can feed on them. Scientists link this period of low primary productivity to the exceptionally low survival of Fraser River sockeye in 2007, leading to a 2009 return that was the lowest on record at that time.

For Bidlack, part of the value and challenge of this research was getting a diverse team of scientists together with expertise in marine systems, water chemistry, glaciers, hydrology, forest ecology, soil, and geology. “We have different ways of looking at, talking about, and ways of measuring this ecosystem. We often study related processes, but in different ways and using different language,” said Bidlack. By integrating findings across fields, the team achieved a more comprehensive understanding of the potential impacts and resilience of the coastal margin ecosystem to climate change.

The paper arose from a workshop organized by the Coastal Rainforest Margins Research Network, supported by the National Science Foundation, the University of Washington Freshwater Initiative, the Hakai Institute, and the University of Alaska Southeast. 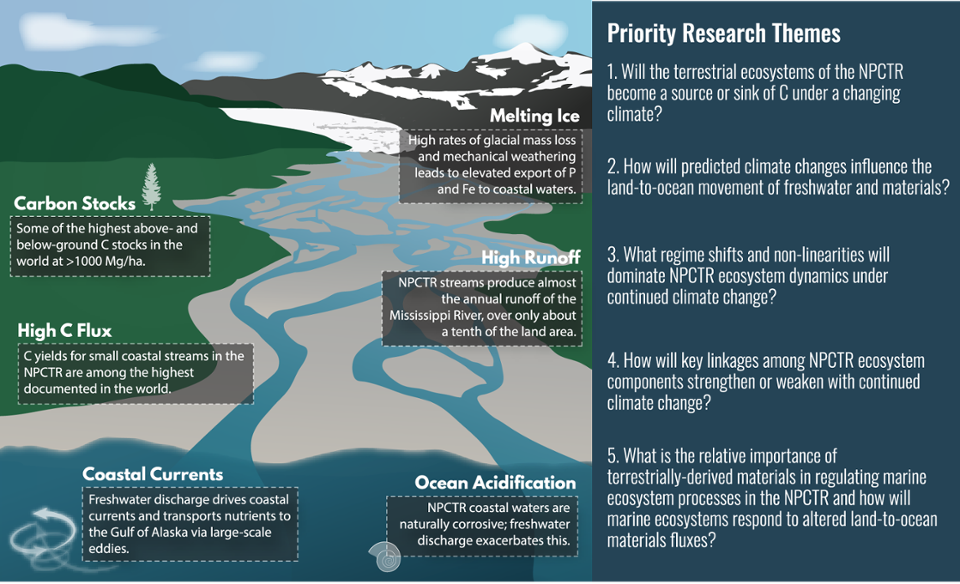