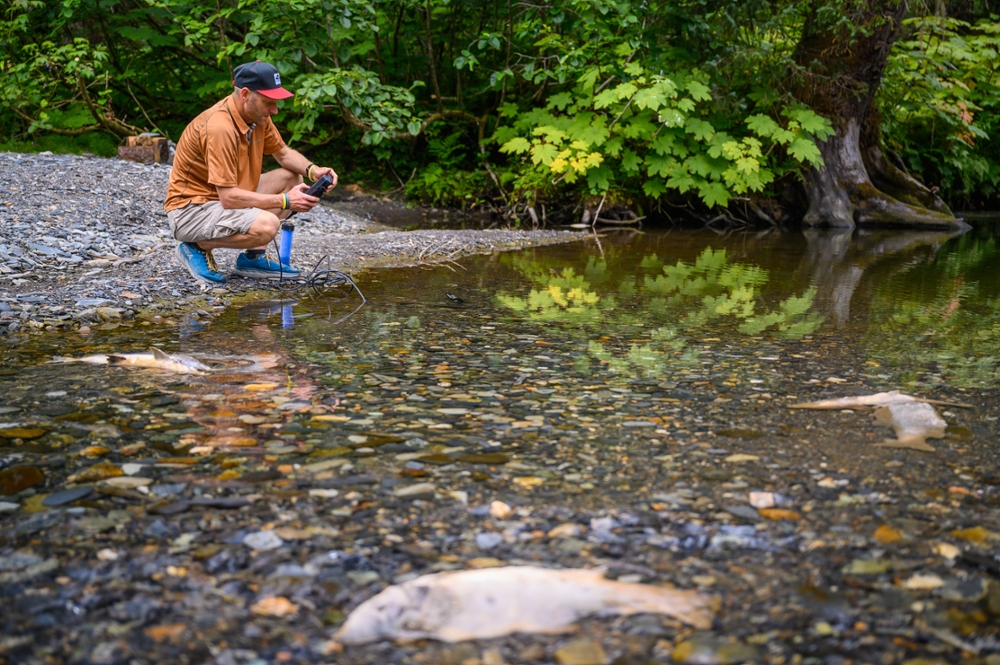 Jason Fellman, one of the faculty members working on the Fire and Ice project, measures dissolved oxygen at Montana Creek in Juneau.

This summer, scientists from ACRC and across the University of Alaska system have been working to understand how climate change might impact coastal ecosystems around Southeast and Southcentral Alaska. Freshwater plays a major role in delivering nutrients and sediment from terrestrial ecosystems far into the Gulf of Alaska. But the timing, amount, and sources of freshwater are shifting as glaciers retreat and snow and rainfall patterns change. The watersheds of Southeast Alaska represent a broad range of glaciation; Some rivers are mostly fed by glacial runoff, while others are completely fed by rain and snowmelt.

Researching watersheds across this spectrum from highly glacierized to absent of glacial influence can provide insight into a future where rain- and snow-fed watersheds dominate the landscape. By documenting the physical, biological, and chemical conditions of the coastal watersheds of the Gulf of Alaska, scientists can start to understand how climate change will alter downstream marine environments and food webs.

To study an ecosystem at this scale takes monumental coordination and many, many hands.

Each month this summer, scientists, students, and volunteers gathered at sites around Lynn Canal near Juneau and Kachemak Bay near Homer to play a part in this large-scale ecological research project.

“Stream teams” traveled to ten rivers around Lynn Canal and Kachemak Bay to collect samples to analyze the water chemistry of watersheds that flow into coastal estuaries. Along remote shores, groups hunched over in small plots in the intertidal zone to record observations and collect sea life. At ten sites off the coast, researchers and volunteers waded in chilling waters to haul seines full of seaweed, sculpin, flatfish, juvenile salmon, and other marine life to shore with numb hands. They cataloged and measured their catch before returning them to the ocean. By boat, teams lowered drifting sensors into the ocean that measure circulation patterns. Some, they recovered on nearby islands. Others were carried by currents as far as fifty miles away.

This colossal effort marked the inaugural summer of Fire and Ice, a five-year project funded by the Alaska Established Program to Stimulate Competitive Research (EPSCoR). In addition to the coastal research in the Gulf of Alaska, Fire and Ice is studying changing wildfire regimes in the boreal forest. The Fire and Ice project involves more than 30 faculty members across the UA system and dozens of graduate and undergraduate researchers.