By Rope, Raft, and Air: A season of research on glacier-dammed lakes 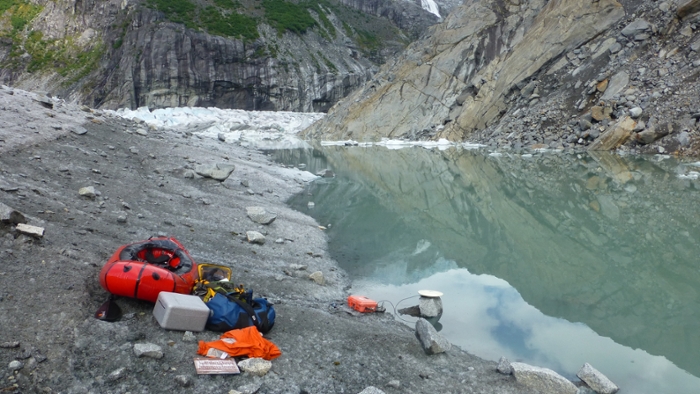 Rappelling down rock cliffs, rafting across glacial lakes, and traversing icy crevasses, all in the presence of a massive, ever-changing glacier – it's all part of the job for glaciologists monitoring glacial outburst floods (also known as jökulhlaups) in Alaska.

In July of 2018, Suicide Basin, a dead ice branch off of the Mendenhall Glacier in Juneau, unleashed more than one billion cubic feet of water (the equivalent of over ten thousand olympic-sized swimming pools) into the Mendenhall River, which flows through the highly populated Mendenhall valley. Such outburst flood events have occurred almost every year since 2011, when the glacier-dammed lake first began forming during the summer months.

Glacier lake outburst floods, which occur when water dammed by a glacier suddenly releases and floods downstream areas, happen across Alaska and in glacial landscapes around the world. Outburst floods can impact infrastructure, such as bridges and roads, and population centers. These floods often catch communities off guard because they often occur in remote locations that are difficult to monitor. In Juneau, AK CASC and ACRC scientists Eran Hood, Christian Kienholz, and Gabriel Wolken are collaborating with teams from the National Oceanic and Atmospheric Administration (NOAA) and the U.S. Geological Survey (USGS) who have been monitoring Suicide Basin for several years. The goal of their work is to better understand and predict the outburst floods that are released from Suicide Basin. "Combining resources and personnel across agencies allowed us to dramatically expand our campaign of geophysical measurements and flood monitoring in the basin this season," said Kienholz, who visited the basin more than ten times, mostly with Jamie Pierce from the USGS.