In the Gulf of Alaska, snow and glacier loss could mean fewer food options for salmon 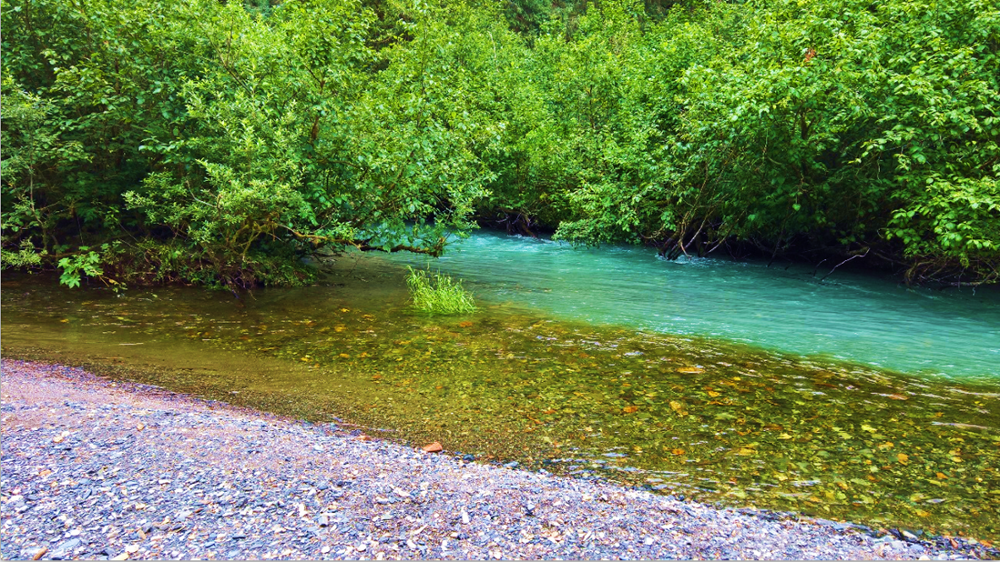 Cool, clear snowmelt, icy, turbulent glacial runoff, and dark wetland rainfall streams meet among Alaska’s coastal mountain watersheds, providing diverse food sources, plant and animal communities, and habitat types. But the mountain glaciers surrounding the Gulf of Alaska have some of the highest rates of mass loss on Earth, and as snowmelt and glacial influences fade, watersheds are losing the diversity of stream conditions brought about by cryospheric –or frozen water–contributions. The result is rivers that look more alike in their hydrology, temperature, and importantly, the structure of food webs that salmon rely on.

A new study in Global Change Biology, led by researchers at the USDA Forest Service Pacific Northwest (PNW) Research Station and the Alaska Coastal Rainforest Center at the University of Alaska Southeast (UAS), looks at the impact of changing watersheds on juvenile salmon growth as glacial and snowmelt influence fades in the Gulf of Alaska. Using a model that simulates the seasonal cycles of aquatic food webs based on river conditions, they found that glacier- and snow-fed streams–despite being overall colder and less productive than rain-fed streams–provided critical foraging opportunities for juvenile salmon in the autumn and spring. As glacial and snowmelt contributions to watersheds fade, distinct seasonal cycles of food availability will be lost, resulting in fewer growth opportunities for juvenile salmon.

Juvenile salmon spend up to two years in the coastal watersheds along the Gulf of Alaska, often traveling throughout a mosaic of silt-heavy glacial rivers, snowmelt creeks, and wetland-dominated rainfall streams to track conditions that help them grow and thrive. In the future, salmon may be left with more homogenous rain-fed watersheds that offer fewer foraging and growth opportunities relative to watersheds where glacier-, snow-, and rain-fed streams exist together.

The study found that when compared to foraging in each stream type alone, salmon that have access to glacier, snowmelt, and rainfed stream regimes have on average 30% more aquatic invertebrate food sources available to them. While colder glacier- and snow-fed streams provide less ideal growing conditions overall when compared to rain-fed watersheds, this additional food source allowed juvenile salmon to continue growing—albeit slowly—throughout the entire calendar year in the model. Conditions for salmon growth were best in glacier streams in the spring, rain-fed streams in the summer, and snow-fed streams in the autumn and winter.

“Food resources likely peak at different times in these distinct river types, creating a more stable food base throughout the year for juvenile salmon that move in search of more abundant food sources before migrating out to the ocean,” said the lead author, PNW Research Station research fish biologist Ryan Bellmore.

The loss of distinct river types and food availability throughout the year means populations will likely have less ability to adapt to extremes such as droughts, scouring floods, and warm summer water temperatures.

Salmon are not the only species that travel throughout watersheds in search of food resources. Amphibians, river otters, bats, and songbirds could face similar challenges in the timing and diversity of foraging options due to the loss of distinct food webs in the region.

This work, funded in part by the USGS Alaska Climate Adaptation Science Center, adds to a body of research showing that the presence of glacier- and snow-fed streams can enhance biodiversity at watershed and regional scales. The study’s co-authors are Jason Fellman and Eran Hood, from the UAS Alaska Coastal Rainforest Center; Matthew Dunkle, with the University of Idaho; and Richard Edwards, with the Pacific Northwest Research Station.

“In addition to supporting unique species and communities, our research suggests that meltwater fed rivers may also support distinct food webs that contribute to a diversity of foraging and growth opportunities for aquatic organisms, not only in the Gulf of Alaska but in meltwater-fed watersheds across the globe,” said Bellmore.