Salmon and oxygen depletion in streams 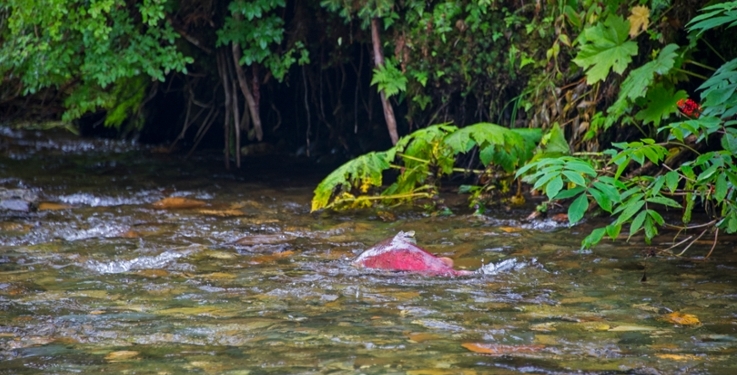 Stand above a salmon spawning stream in Southeast Alaska come late summer, and the sheer quantity of fish is impressive. Maneuvering through water sometimes barely higher than their gills, salmon are powerful ecosystem engineers that disturb sediment and fertilize rivers. This fall, a study published in Aquatic Sciences led by ACRC researchers Jason Fellman, Eran Hood, and Sonia Nagorski looked at how salmon may be changing the chemistry of streams they travel in.

The study came out of earlier monitoring efforts at Peterson Creek in Juneau, where stream sensors regularly collect data like stream temperature and dissolved oxygen levels. In 2012, the team noticed oxygen levels in the creek had dipped to a surprisingly low point, almost below thresholds that fish can tolerate. With salmon swimming upstream at their feet, Fellman and Hood had a question. Do salmon affect stream dissolved oxygen and, by extension, the ability of streams to support salmon?

The team recorded measurements at four streams surrounding Juneau over a period from May to October 2015. At each river, the team measured stream characteristics at an upstream site beyond the reach of migrating salmon, and at downstream sites where fish were abundant.

What they found was that physical factors, like stream temperature and water levels, interact with biological factors such as fish density to alter oxygen levels in streams. During relatively dry periods over in the summer, stream levels drop and migrating salmon populations are forced into smaller areas. The researchers proposed that as they swim, mate, and die, fish contribute to oxygen depletion in the water through respiration and decomposition by oxygen-sucking microbes. To add to the effect, low water flow also lessens the ability of streams to wash decomposing fish carcasses downstream, extending oxygen depletion in the area.

Alone, these biotic factors may not have a substantial impact on the stream ecosystem. But higher fish density due to low flow coincides with other physical factors that create a low oxygen environment. When water is low, less oxygen is mixed into streams by rapids and turbulent water. On top of that, low flow often occurs during the summer when stream temperature is high and salmon migrations are at a peak. The combined effect of low water, high temperature, and high fish density are linked to a significant drop in dissolved oxygen levels into a range that is potentially ecosystem-altering. Fish may not be able to migrate as far, juvenile fish survival rate drops, and mortality events could rise for regionally important species like coho salmon.

Though the low oxygen periods observed in the study weren’t long enough to cause detectable impacts to the stream ecosystem, climate change could make events like this more frequent and severe. Winter snowpack acts as a buffer to keep streamflow levels well supplied and cool through the summer, but warmer temperatures are resulting in declining snowpack across the Pacific coastal temperate rainforest. Climate models show lower summer streamflows combined with warmer stream temperatures are in store for the region, suggesting that dissolved oxygen depletion events will become more regular in these watersheds.

“Snowmelt sustains streamflow in the summer, and with minimal snowpack, if there are dry summers with little rain (like the one we just had), the fish start to pile up,” says Fellman.

What’s interesting is not only the density of fish, but where they come from. Fish bred in hatcheries account for an average of 73% of chum salmon caught commercially in the region, and it’s highly likely that hatchery fish make up a significant portion of the population in the study streams. This straying of hatchery salmon into natural stock salmon streams may harm the health and productivity of wild salmon by contributing to streamwater oxygen depletion.

The researchers are currently working on a complementary part of this study, where they are using their data to look at the effect that spawning salmon have on bringing nutrients from the ocean into coastal watersheds.

The full paper is available online at Aquatic Sciences.