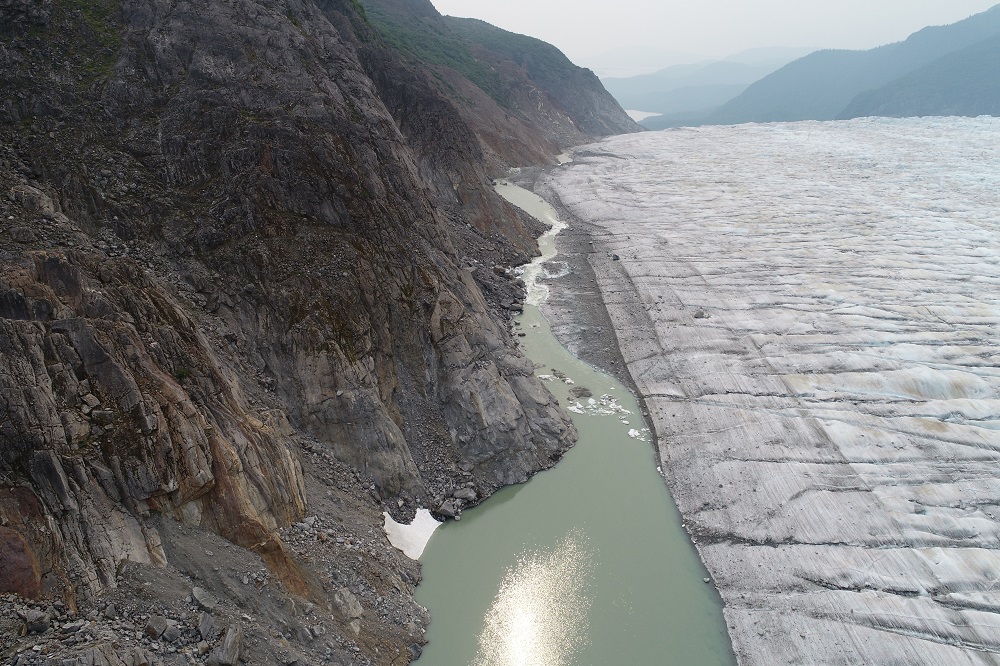 View across the overflowing portion of the lake. The water runs along the glacier boundary towards Mendenhall Lake visible in the far distance. Image by Christian Kienholz.

Every summer since 2011, the glacier-dammed lake in Suicide Basin above Juneau has unleashed one or more floods into the valley below – sometimes in perfectly dry weather. The largest outburst flood event to date occurred in July 2016. Over 16,000 cubic feet per second of water flowed through the Mendenhall River. That’s nearly the level of discharge of the Colorado River through the Grand Canyon and nearly ten times greater than the average water flow of the Mendenhall River in summer.

The summer of 2018 was the first observed occurrence of water flowing over the ice dam. The overtopping was a precursor of the start of a lake release beneath the glacier, which began less than a day later. This year, overtopping lasted for almost a week. Water in the basin dropped slowly initially, due to erosion generated by the water overtopping the ice dam. On Saturday morning, July 13th, the basin finally began to drain subglacially. While the first day of drainage followed a familiar pattern with rapidly rising outflow, drainage slowed down during the second day, far before Suicide Basin was empty. Consequently, the water level at Mendenhall Lake rose only to about three feet above normal levels. Following one and a half days of slow drainage, drainage accelerated again, causing a second, lower peak at Mendenhall Lake.

“We had a unique event this year – different from what we have seen in the past. First, we had overflow that lasted for almost a week. Then we had this early slow down of drainage, followed by another acceleration and a second peak at Mendenhall Lake. This two-peak scenario was not among the likely scenarios, considering that none of the previous events had two peaks, ” says University of Alaska Southeast Research Assistant Professor of Environmental Science Christian Kienholz. “It was great to monitor this event closely. Each season of observation in the basin improves our ability to predict the timing and magnitude of flooding,” Kienholz continued.

Christian Kienholz has spearheaded the monitoring efforts in Suicide Basin. He is mapping the topography of the ice dam and basin down to mere centimeters of accuracy using drones. This imagery, combined with water level sensors, timelapse cameras, and frequent visits to the basin, is vastly improving our understanding of how Suicide Basin stores water and generates outburst floods.

“We need to be able to make accurate predictions about the timing and the magnitude of the flood. To do this, we need to understand the ice dynamics in the basin,” says UAS Professor of Environmental Science Eran Hood.

Understanding the ice dynamics in Suicide Basin is not an easy task, as it can change dramatically from year to year. Factors like the thickness of ice in the dam, the channel through which the water flows once the outburst flood begins, and the amount of water collected in the basin, interact to determine if, when, and how quickly a flood will occur. Flooding levels also depend greatly on the pre-existing level of water in the Mendenhall River when the outburst flood begins. Coordinated monitoring helps demystify the processes that control the filling and drainage of the basin and give advance warning to residents.

Emergency Program Manager for the City and Borough of Juneau Tom Mattice works closely with Kienholz, Hood, and other agency partners to ensure that residents receive an advanced warning for flood events. “The Suicide Basin program has been a great showing of partnerships in the region of Southeast Alaska. We’ve been incredibly fortunate to be working with our partners. With the National Weather Service, USGS, and the University, we’ve been able to develop real-time monitoring programs, with mitigation actions taken by the public,” says Mattice.

For UAS undergraduate intern Skye Hart, the work in Suicide Basin has also provided a chance to use skills she acquired in an environmental drone monitoring class taught by Kienholz this spring. Hart is assisting with drone monitoring in the basin, using her knowledge in a real-world challenge impacting her community.

In a complementary effort, a graduate student from the University of Alaska Fairbanks, Dina Abdel-Fattah, has gathered feedback on the informational needs of stakeholders, city officials,  local residents, and tour operators in Juneau regarding these flood events. Her work has guided the creation of communication tools and response efforts for future flood events and has helped to further understanding of how scientific information regarding these events is best communicated, understood, and used by a large and diverse audience.

A new website was created to provide near-real-time updates on the water level in the basin and at Mendenhall Lake and River. The monitoring is made possible by joint efforts of the City and Borough of Juneau, the National Weather Service, USGS, the Alaska Division of Geological and Geophysical Surveys, University of Alaska Southeast, and the Alaska Climate Adaptation Science Center.

This article was originally published on the Alaska Climate Adaptation Science Center website.