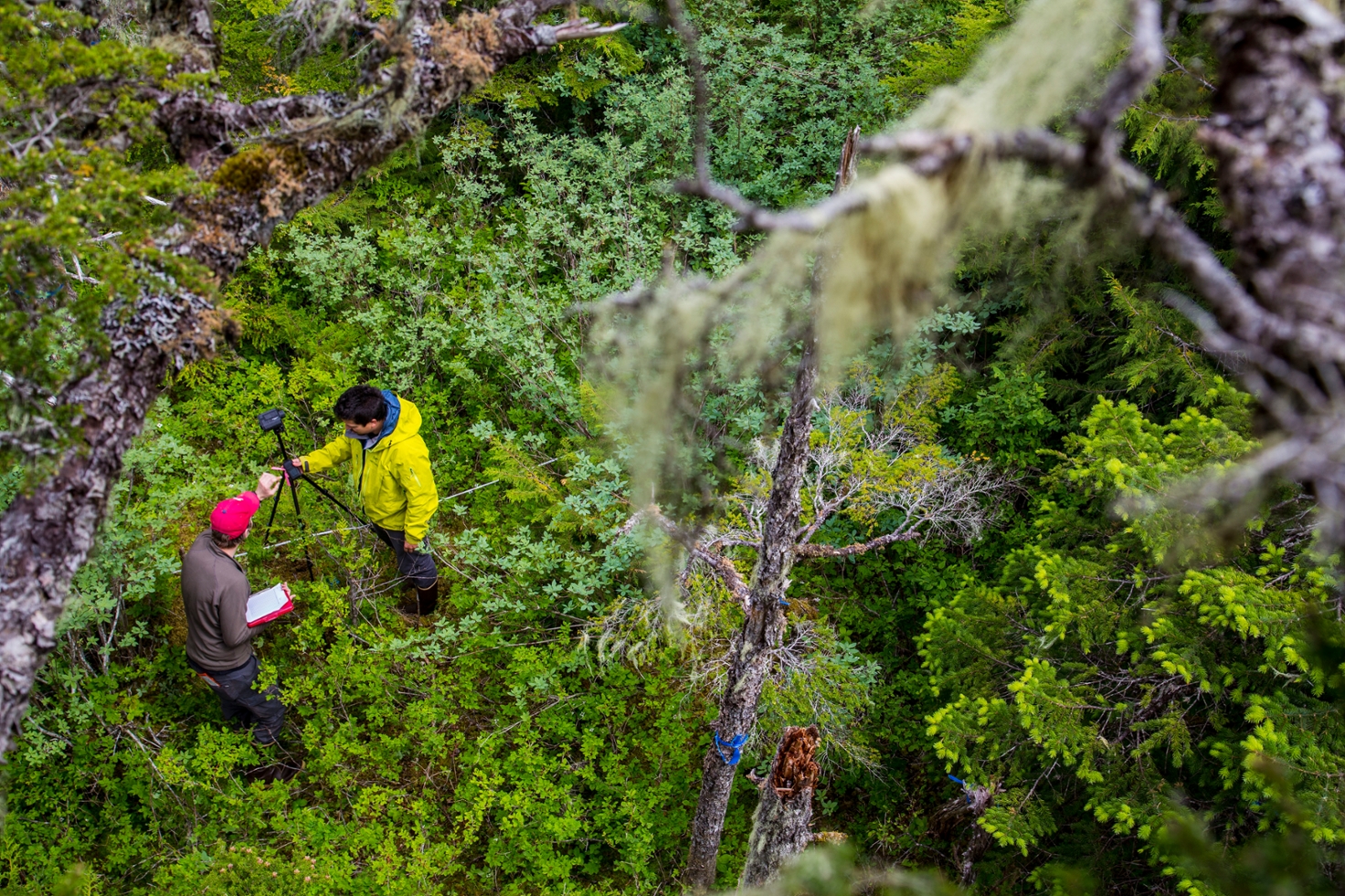 Yellow-cedar is an economically and culturally important tree species in Alaska. Image by Mark Rainery, University of Alaska Southeast.

A new study led researchers from the Coastal Rainforest Margins Research Network and ACRC director Allison Bidlack looks at the ability of yellow-cedar to reestablish seedlings, or regenerate, in areas of decline.

As yellow-cedar numbers decline, more climate-tolerant trees such as western hemlock and Sitka spruce may begin to replace the species. Whether yellow-cedar could repopulate an area after canopy decline remains a question, as the death of mature trees doesn’t always mean a shrinking range for a species. Both mortality of mature trees and the success of seedlings regrowing contribute to whether a species will continue to survive in a region. The death of adult trees generally means a loss of seed supply and potentially more competition from other species not as affected by the conditions. But canopy decline can also be good for seedlings’ environment by opening up the canopy and allowing more sunlight to reach the understory to encourage growth.

It’s often difficult to look at the dynamics of canopy decline because the changes driving the mortality of one species cause declines in multiple species. For instance, other systems impacted by climate change experience fire and drought damage that affects species across the board, rather than targeting one particular species. This makes it harder to distinguish the role of mature tree mortality versus the failure to regenerate for individual species because competition between species is changing as well.

“This is a unique chance to consider the ecological impacts of the decline of a singular species. Often, when we are looking at an ecosystem affected by climate change, multiple species are declining at once and it’s hard to pull apart the interactions that occur. With yellow-cedar, that’s not the case. Other tree species in the community are not seeing the same rate of mortality,” says Bisbing.

To uncover how yellow-cedar regeneration is being affected, Bisbing and colleagues looked at nearly 70 plots in Southeast Alaska to find trends in mature tree health, abundance, and which tree species were regrowing in areas of decline.

They found that mortality of mature, seed-producing trees corresponds with declines in yellow-cedar regeneration success. The low regeneration rates of yellow-cedar in areas of mature yellow-cedar tree decline (less than 20%) seems to be driven by lack of seeds, as well as soil drainage and winter temperatures. The loss of canopy also creates a self-reinforcing cycle in which canopy gaps in declining forests lead to more melting of springtime snowpack and more freezing events as a result.

By number, most of the decline has happened in wet, lowland areas. But proportionally, the highest decline happens in upland forests, where there are already fewer yellow-cedar individuals. By looking at where the decline is occurring proportionally rather than just the total decline of the study area, the research sheds a new perspective on where the most severe declines are happening. There are and will continue to be fewer yellow-cedar trees in upland areas in the future.

The loss of yellow-cedar is only beginning. Up to fifty percent of the current suitable habitat for the species is expected to experience the climatic conditions associated with the decline (cold, low-snow winters) by the end of the century. This work suggests that yellow-cedar loss will not be recovered by regeneration, and we can likely expect a major ecological shift in the forest community of Southeast Alaska.

It’s possible as the range of conditions that are causing fatal root freeze may pass as we continue on our warming trajectory. As Buma describes it, this “donut hole” of climate conditions that are causing rapid decline could pass as warming continues to a point that less early spring frosts occur, allowing yellow-cedar to recover. Bisbing, Buma, and Bidlack are also conducting an experiment on the suitability of Western redcedar to expand into the range of yellow-cedar. Both species are present on Prince of Wales Island in southern Southeast Alaska, so they are planting red cedar seedlings in areas of yellow-cedar decline to see if that species could fill the ecological role yellow-cedar is leaving behind.