My summer in the field

Ecology up close as an ACRC intern 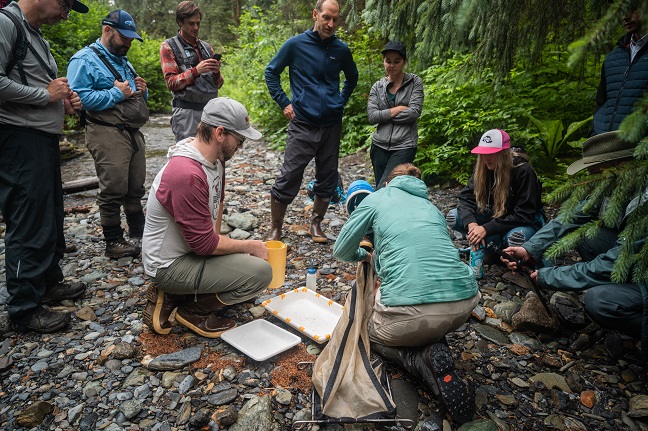 “Choose a job you love, and you will never have to work a day in your life.” – Confucius. My spring/summer internship with the Alaska Coastal Rainforest has been the very embodiment of that quote. Who would have thought that one brief exchange with my Earth and Environment lab professor, Jason Fellman, would lead to this wonderful opportunity. During the fall semester of 2021, I was standing in Montana Creek measuring water velocity with a classmate. Jason is nearby and I comment, “Man, this is the kind of stuff I’m here for, being out in the field.” “Really? You enjoy this?”, he asks, seemingly surprised to hear that about what seems like, and what many may consider, a mundane task. “Oh, for sure! I’d love to find a career being outside in the field, collecting data and analyzing samples.” Four months later, just before the start of the spring semester, I receive an email from Jason and professor of environmental science Eran Hood with an invitation: an internship assisting Emily Whitney, a research professional at ACRC, with laboratory tasks, downloading data from sensors installed in several streams around Juneau and preparing for the summer sampling season. 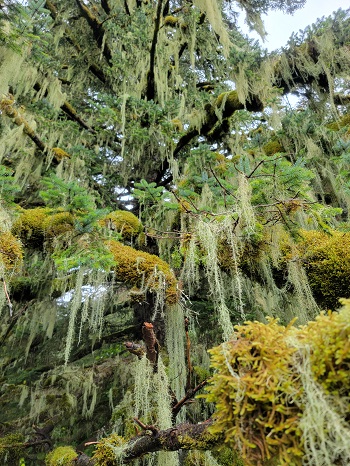 The summer season began with surveying and installing additional sensors called sondes into each stream we studied. These sensors record a variety of data every hour: turbidity, dissolved oxygen, conductivity, dissolved organic matter, and temperature. Once the sensors were installed, flow measurements and sampling began. Taking flow measurements determines the amount of water discharged from a stream and collected samples are analyzed for things such as alkalinity, silica, ammonium, phosphorous, dissolved organic carbon, etc. Any one of these analyses can then be paired with the discharge to calculate the amount that is exported to the estuary. After a few weeks of this, we started a new project collecting drift samples to examine the amount of particulate organic matter being exported as well. Between these three tasks and their frequency, some weeks were often filled with nothing but field days. Now that we’ve come to the end of the season, a lot of time has been spent crunching data. The final project I am working on is to determine the relationship between our sonde sensors and a couple of the analytes, TSS, and alkalinity. With a relationship established between the sensor and analytes, we can then calculate the chemical content of the stream using the sensor data painting a much finer picture than we normally have with bi-weekly water sampling.

Spending long days in the field throughout the summer has given me a new appreciation for the Pacific coastal temperate rainforest ecosystem. Ever since I moved to Juneau, I have loved the environment and 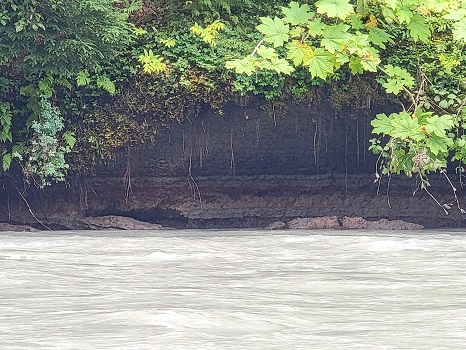 climate here, opting to spend a lot of time outdoors. However, spending so much time at the same sites, and looking so closely at the processes that occur, I have developed a much greater understanding and appreciation of our streams and noticed changes that I wouldn’t have before accepting this position. Observing how frequently the streams change in not only their color, chemistry, content, and size, but how they change shape so quickly as well, eroding banks and depositing sediment into new sand and gravel bars. And even the little things such as the beautiful soil stratigraphy hidden by a shadow in a deep cutbank at Herbert River or the plethora of biodiversity found in the branches of a Sitka Spruce next to Peterson Creek. This summer has led to an invaluable experience; I have learned how to conduct field research, perform lab analyses, and have gained a better understanding of stream dynamics. But most important of all, it has solidified my interest in Environmental Science and reinforced the idea that the academic path I have chosen is absolutely the right path for me. I am grateful to have had this opportunity and very much appreciate the mentorship and guidance I have received from Emily, Jason, and Eran.