To harvest or not to harvest 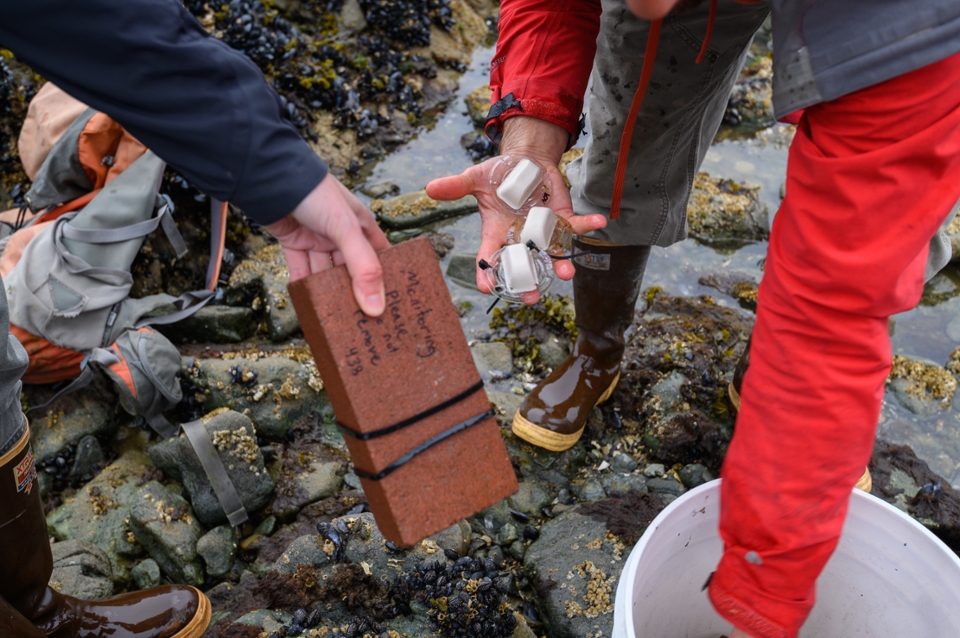 Clod cards, the blocks of plaster of Paris in Harley's hand, are used as a measure of wave activity at the sites.

Alaskans love shellfish. From butter clams to razor clams to geoducks (pronounced gooey-ducks), shellfish are a delicious treat and an important subsistence item for Native communities. People have been harvesting shellfish here for thousands of years. At some sites in British Columbia, archaeologists have found clam beds constructed over 1,000 years ago[1].

But clams and mussels aren't always safe to eat. Many shellfish species can accumulate a toxin that is produced naturally by phytoplankton called paralytic shellfish poison, or PSP. This toxin can cause paralysis and even death. Shellfish often are harvested in the winter and spring when phytoplankton activity is usually low, however increasing ocean temperatures have lengthened the season where phytoplankton can grow in Southeast Alaska.

The Southeast Alaska Tribal Ocean Research (SEATOR) group has been monitoring concentrations of PSP in shellfish since 2016. More than a dozen communities from Southeast and Southcentral Alaska regularly send samples of shellfish to Sitka where they are analyzed for PSP.

One of the lingering questions is how much variability there is between beaches. Here in Juneau we regularly sample two places, Auke Recreation Area and Amalga Harbor, but what if you want to harvest shellfish in Tee Harbor? Or North Douglas?

This summer, myself and two UAS undergraduate students (Liz Bryson and Mollie Dwyer) are trying to answer that question. We're monitoring PSP in mussels from four different beaches around Juneau to see if there are differences in shellfish toxicity between these sites. We're measuring things like water temperature, salinity, and wave exposure using these neat little devices called clod cards.

Clod cards are small blocks of plaster of Paris (the white cube in the photo below) which are strapped to a brick so that they sink below the water. The plaster of Paris dissolves at a constant rate so sites that are exposed to a lot of wind and swell (like the Shrine of Saint Therese) dissolve faster than sites that are more protected from wind and swell (like Auke Bay). By measuring the change in mass we can get an idea of how much wave action and water movement mussels are being exposed to on different beaches. This might affect the amount of toxin they can absorb.

By the end of this summer, we should have a better understanding of some of the drivers of small scale variation in PSP concentrations in shellfish. Hopefully, this will allow us to make better and more accurate predictions of PSP in the future, and make shellfish harvesting safer in Southeast Alaska.

John Harley is an ACRC postdoctoral researcher studying the environmental drivers of paralytic shellfish poisoning in Southeast Alaska. Find out more about his work on the Shellfish Toxicity page.