Juneau is situated on the west coast of North America at 58 degrees north latitude. It lies in the heart of the Pacific coastal temperate rainforest that stretches along the west-facing coastal mountains from Southcentral Alaska to Northern California. Temperate rainforest regions are characterized by persistent cloud cover, abundant annual precipitation, and little annual temperature variability. The complex topography in and around Juneau causes tremendous variability of weather conditions over very short distances.

Juneau’s coastal marine environment is characterized by a narrow continental shelf, deep fjords, and long, narrow channels surrounded by rugged mountains and glaciers. This geological complexity creates seasonal and spatial variability in circulation processes, leading to an array of habitat types that supports one of the most biologically diverse marine ecosystems in the world.

Seasons are caused by the tilted aspect of the earth as it rotates around the sun. Even though the earth is farther from the sun during our summer, the northern hemisphere is pointed more directly toward the sun during that season, resulting in longer days and warmer temperatures. Conversely, during winter, the northern hemisphere is tilted away from the sun, significantly reducing the duration and intensity of sunlight at our high latitude.

Spring (March - May) Spring is historically the driest and least cloudy season in Juneau. If the preceding fall and winter months are drier than normal, spring’s dryness can exacerbate and extend periods of drought. For example, the cumulative effects of drought in Southeast Alaska from 2017 to 2019 resulted in some reservoirs being too low to generate hydropower. The dryness of spring makes it the most likely time of year for wildfires in the CBJ - most of which are human-caused, with very few ignited by lighting.

Summer (June - August) Summer, although the warmest season in Juneau, is relatively cool in the rainforest, with a narrow temperature range. Sea breezes blowing in from the ocean prevail during summer as does persistent, shallow cloud cover. Daily high temperatures are around 60°F. The highest temperature recorded in Juneau is 90° F (July 7, 1975). Thunderstorms occur here most often in June and July but are still rare. Lightning strikes are more often detected here by remote sensing technology (i.e., satellites or antenna networks on the ground) than by human observation. Glacier outburst floods (also known as “Jokulhlaups”) affecting the Mendenhall and Taku River valleys are the most likely natural hazards to affect the CBJ during summer, but these occur in limited areas.

Fall (September - November) Fall is the wettest season in Southeast Alaska. Large Pacific storms steer abundant precipitation into the Alaska Panhandle and can be associated with damaging winds. Excessive prolonged rainfall, typically from organized Atmospheric River Events (see Section C.1), can lead to flooding. Precipitation in Juneau typically remains in the form of rain until November. At times, the combination of rain, wind, and high tides can result in storm surge flooding - water intrusion beyond the normal high tide line.

Winter (December - February) Winter is, not surprisingly, the coldest time of year. However, our temperate coastal climate allows many winter days to warm above freezing. Winter season temperatures are the average of three distinctly different weather regimes: warm and wet Pacific storms; cold and dry periods when inland air masses spill over the coastal mountains; and the transition periods between them. The first snowfall at sea level in Juneau usually occurs in early November but has been as late as mid-December. January is typically the snowiest month of the year, averaging 24.5 inches. The snowiest “full” winter season (Nov-May) was 194.3 inches in 1964-65. Snow levels fluctuate during the winter from sea level to the lodge at Juneau’s Eaglecrest Ski Area and higher. Juneau’s Taku windstorms occur most frequently in January and February during the coldest period of the year. These localized events cause high wind speeds blowing over mountain ridges east of Juneau to be forced downslope and accelerate at hurricane-force speeds toward downtown Juneau and Douglas.

There is a clear long-term upward trend of more precipitation
Precipitation across Juneau varies dramatically across short distances and over time. While precipitation occurs here frequently throughout the year, it is usually light and manageable. Heavy rain is most common in the fall (August to October) as are damaging high winds associated with large Pacific storms. Juneau averages 230 days per year with “measurable” precipitation (at least 0.01 inch of liquid), including an average of 43 days with measurable snowfall. The average annual precipitation has increased by approximately 20 inches over the past 96 years has seen a significant increase in annual precipitation, though there were short-term variations within this period. For example, the mid-1930s to mid-1940s were wet, then the 1950s to 1970s were comparatively dry, and since the mid-1990s wetter conditions have returned. And within these decade or two intervals, there are individual years that are unusually wet or dry. This year-to-year and decade-to-decade variability will continue in the future even as the long-term trend of precipitation continues to increase. 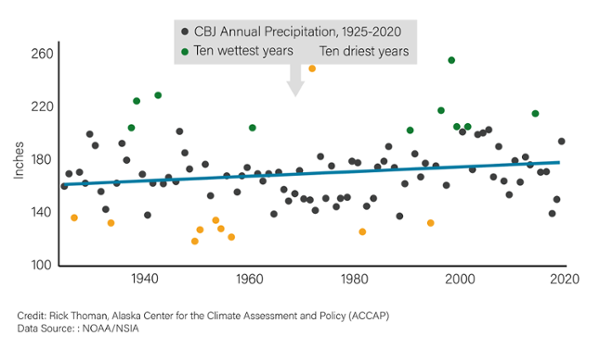 Temperatures are generally rising, with significant increases in the winter and summer but much less change in spring and autumn
Annual average temperatures have been slowly progressing warmer, though this is mostly the result of the absence of any extremely cold years in recent decades rather than an increase in temperatures in the warmest years. Winter and summer show the most significant increases, with much less change occurring in spring and autumn. Taken as a whole, the retreat of glaciers, increased flooding, and greater avalanche threat are all related to these larger-scale changes in the environment. Other observed changes that have cascading impacts, such as the duration of low elevation snow cover, are directly traceable to seasonal changes in temperature and total precipitation. These changes will continue in the future, possibly at a much greater scale.

Figure 2. CBJ Annual Temperature
Temperatures have been rising in the CBJ over the last 97 years. Adapted from NOAA/NCEI 2021. 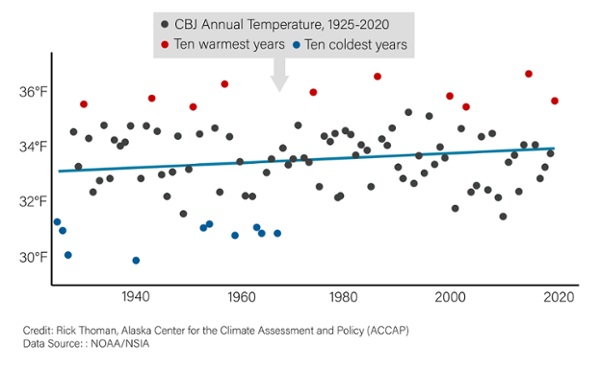 Continued warming can be expected to decrease the amount of snowfall near sea level
The longest continuous measuring of CBJ snowfall has been done at the Juneau Airport. Between 1943 and 2020, the average annual snowfall recorded at the airport was 93.7 inches. Despite well-documented warming during this period, there was a very modest downward trend in winter snowfall.

Figure 3. Annual Winter Snowfall at the Juneau International Airport. Winters are represented by the year in which they begin. For example, 1980 represents the winter of 1980 -1981 (November through April). Source: National Weather Service, Juneau 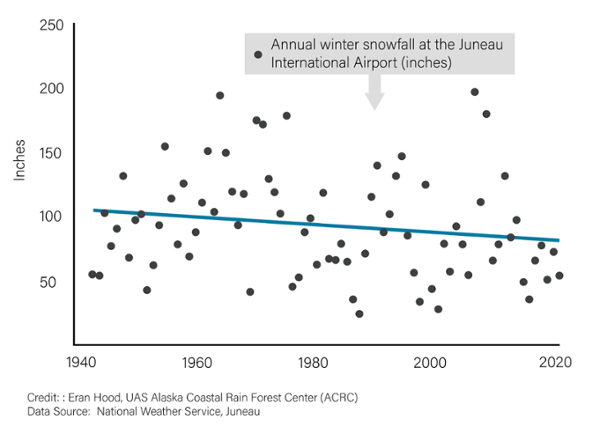 Winter temperatures in Juneau hover very close to the freezing point of water, so small changes in temperature can dramatically alter the proportion of precipitation that falls as snow in winter. In particular, continued warming is expected to decrease the amount of snowfall near sea level in the CBJ. On a regional level, winter snowfall in Southeast Alaska and coastal British Columbia is projected to decrease 22-58% by the end of the century, with most of the decrease dependent on rates of global greenhouse gas emissions in coming decades.1

Changes in snowfall will affect the broader ecosystem
The proportion of annual precipitation that falls as snow has widespread implications for Juneau. Winter snowfall impacts the amount and temperature of water flowing in streams during summer months, which can influence the suitability of spawning habitat for salmon. Snowfall also has a strong impact on the health of local glaciers and icefields because snow adds mass to glaciers and protects glacier ice from exposure to and melting by solar radiation during summer. From an ecological standpoint, snowcover acts as a blanket that insulates the soil, protecting small mammals and tree species such as yellow cedar from mortality due to freezing.

Winter recreation at risk
Snowfall is also important from a social standpoint because it influences recreational opportunities. For example, recreational opportunities available through downhill and Nordic skiing at Eaglecrest Ski Area and several locations in Juneau (below ~3000 feet) can be considered to be “at risk,” similar to low elevation areas of mountain ranges in the Pacific Northwest. 2

Darker surfaces lead to less snow
Decreasing snow cover creates a self-reinforcing cycle of less snowfall via the ice-albedo feedback effect. Less snow cover results in more warmth being absorbed through solar radiation into the darker ground surface, which increases surface air temperature and decreases the chance of future snowfall. Taken together, projected increases in air and ocean temperatures combined with the ice-albedo feedback effect can be expected to result in lower snowfall amounts near sea level in Juneau in the future.

Changing snowfall patterns lead to an uncertain future for avalanches
At higher elevations in the Coast Mountains where winter temperatures rarely get above freezing, future snowfall could increase as warmer air temperatures produce wetter storms along the Gulf of Alaska. The impact of changing snowfall regimes on avalanche hazards in Juneau is difficult to predict. Decreasing snowfall could lower the risk of avalanches; however, more frequent rain-on-snow events could increase the occurrence of large slab avalanches. 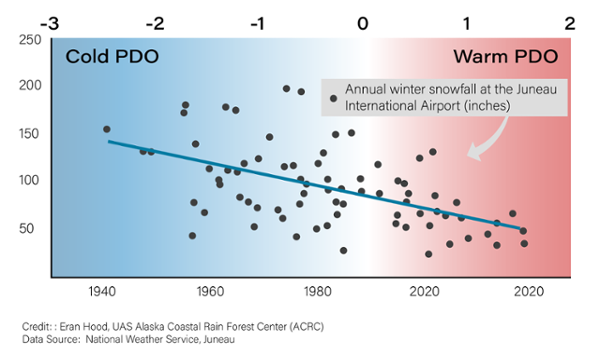