Sea level rise is currently outpaced by land surface uplift (isostatic rebound) caused by receding glaciers
Southeast Alaska is currently experiencing extreme rates of land surface uplift and sea level change. Glaciers and icefields in the Coast Mountains have thinned rapidly since the end of the Little Ice Age approximately 250 years ago, and the associated unloading of the Earth’s surface has led to land surface uplift (or glacial isostatic rebound) across the region.1 Current rates of uplift in the Juneau area average about 0.6 inches (15 mm) per year according to a model using GPS measurements. Rates of uplift vary significantly along the coast, reaching up to 1.2 inches (30 mm) per year around Yakutat and Glacier Bay, where rates of post-Little Ice Age glacier loss have been highest, and tapering off rapidly to the south of Juneau.2

Juneau is experiencing a relative decrease in sea level
Globally, sea level rise has averaged 0.06 inches per year over the last century, with current rates exceeding 0.12 inches per year. Because land surface uplift rates in Juneau have outpaced rates of sea level rise, Juneau has and continues to experience a relative decrease in sea level. For example, shoreline mapping has demonstrated that shorelines in Juneau have been raised by roughly 10 feet since uplift started in the late 1700s. Land surface uplift is predicted to continue for multiple centuries as a result of past and continued glacier ice loss around Juneau.

Figure 5. Coastal Uplift Rates
Land surface uplift rates predicted by a glacial isostatic adjustment model (including the Last Glacial Maximum components) for southeast Alaska. Contours are drawn every 0.04 inches (1 mm)/year with thicker contours every 0.2 inches (5 mm)/ year. Contours for uplift are shown in red, while those for subsidence are shown in blue. The location of Juneau is denoted by a blue star. Adapted from Hu & Freymueller (2019). 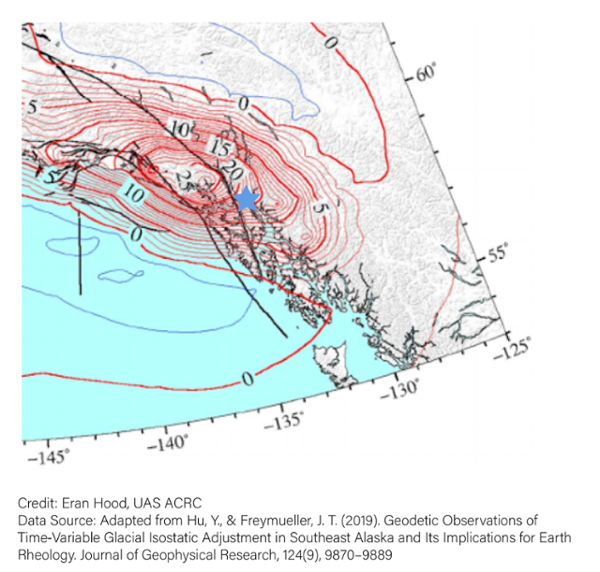 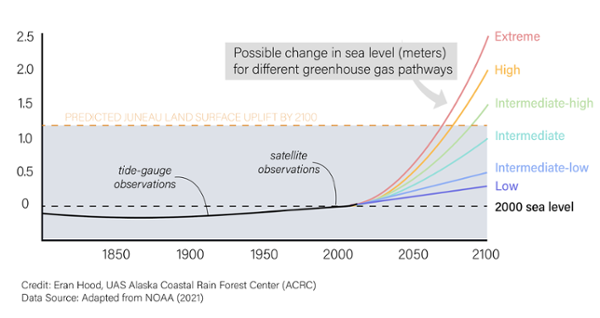 The cascading and broad effects of climate change are anticipated to greatly stress many parts of the ocean’s ecosystem, such as whales, fish, seabirds, and algae (phytoplankton). By 2080, the mean sea surface temperature is predicted to increase by about 3°C (compared to 1976-2005) in the Gulf of Alaska. The marine heatwave of 2013-16 may be viewed as a harbinger of climate change impacts likely to affect Juneau and the rest of Southeast Alaska’s marine ecosystem in the future.1, 2, 3 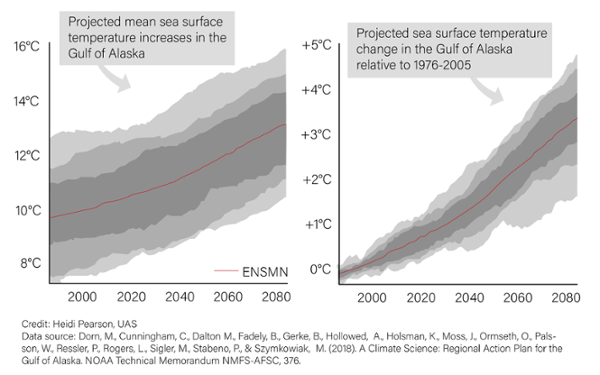 Phytoplankton decline in warmer waters
Warming waters hold less dissolved oxygen and decrease upwelling, the mixing of dense, cooler, nutrient-rich waters towards the ocean surface, and increase stratification, leading to fewer nutrients in the mixed layer and declines in phytoplankton abundance. This can impact species throughout the marine food web, from microorganisms to whales. However, tidal influences in Southeast Alaska may decrease stratification and dampen these effects.4

Marine heatwaves put whales at risk
In Juneau and Glacier Bay, the marine heatwave coincided with the presence of fewer humpback whales in the area, with those being in poor body condition, and fewer calves born from 2014 to 2018.18,19 These observations were reflected in low humpback whale reproductive rates on the Hawaiian breeding grounds during this same time period. Taken together, these observations indicate reduced prey availability during and after the marine heatwave. Changes in the humpback whale population could have dramatic consequences for Juneau’s whale-watching industry, which generated $37.7 million in direct economic impacts in 2019.20 Whales and seabirds are regarded as climate and ecosystem sentinels, and effects on these species are often more readily observable than in other marine species.21 Climate-induced changes to these top predators are likely to tell us about effects occurring throughout the marine ecosystem.

Glacier melt buffers impacts for now
In coastal regions with glacial influence, like Juneau, warming air temperatures and more glacial runoff may increase nutrients and primary productivity in the short term. However, once glaciers retreat far inland, the influence on coastal dynamics is likely to weaken.22 Increased freshwater runoff has already been linked to regional declines in Pacific herring in Prince William Sound and the Gulf of Alaska.23 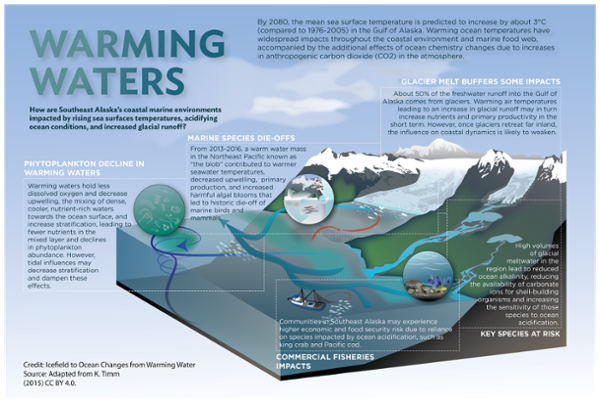 Acidifying oceans are likely to cause broad negative impacts on the marine ecosystem
The effects of climate change on the marine environment are accompanied by the additional effects of ocean chemistry changes due to increases in anthropogenic carbon dioxide (CO2) in the atmosphere. The uptake of that CO2 by the ocean has led to the acidification of the world’s oceans with an average decrease in pH of 0.1 (approximately a 30% greater acidity).1

Alaska faces greater and variable impacts
This uptake of CO2 by the ocean will be greater in Alaska due to the state’s relatively colder water.2 Alaska’s deep waters are also naturally higher in CO2 (i.e., more corrosive) due to global ocean circulation. Measurements of ocean acidification in the large seas surrounding Alaska have revealed expected seasonal variability in CO2 levels. This variability is driven by a combination of declines in CO2 by marine phytoplankton production, increases in CO2 due to winter storms mixing up deep ocean water, and variable effects on CO2 by contributions from glacial melt.

In Southeast Alaska, the high volume of glacial meltwater reduces ocean alkalinity, also reducing the availability of carbonate ions for shell-building organisms and increasing the sensitivity of those species to ocean acidification.3 The M/V Columbia ferry has collected data throughout Southeast Alaska’s inside waters since 2017, showing a seasonal trend in CO2 levels with higher CO2 in the fall and winter (highlighted by the Alaska Ocean Acidification Network in a 2018 report).4, 5 Data collected at a site outside Sitka Sound show similar seasonal trends in CO2 levels and provide a baseline that will allow scientists to detect future changes from ocean acidification.

Figure 9. Seasonal Acidification
Seasonal trends of pH (left) and argonite (right) from the M/V Columbia ferry over a period from 2017 to 2019 show that acidification spikes in the fall and winter. Source: Evans et al. 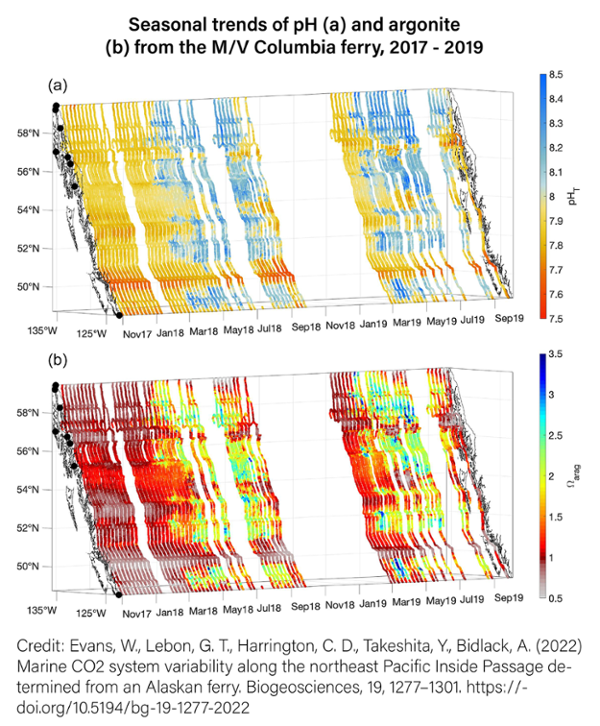 Shell-building organisms are at risk
As ocean acidification increases in Alaska, these seasonal trends will become more pronounced and pass thresholds that affect marine organisms. Recent models for nearby Prince William Sound, which is influenced by similar physical processes as Southeast Alaska, predict that by 2050 there will be a decrease in pH between approximately 0.1 and 0.15 in the water column, most pronounced between 160 feet (50m) and 500 feet (150m).6 This reduction in pH would cross thresholds where carbonate would not be available for some shell-building organisms.